[The Neighborhood Artists] The Firefly In My Hands

‘The Firefly In My Hands’ 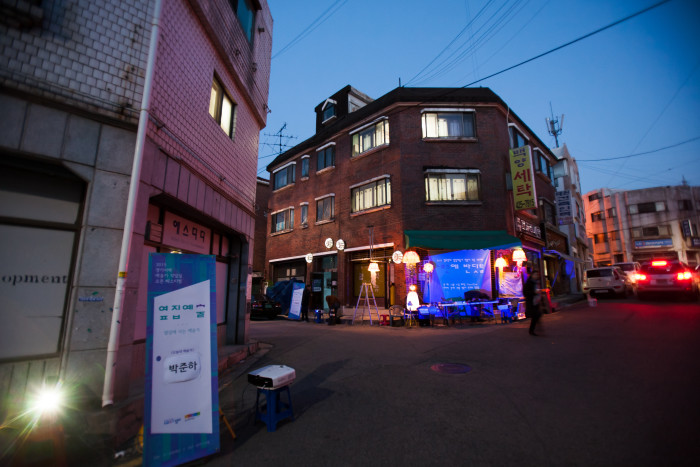 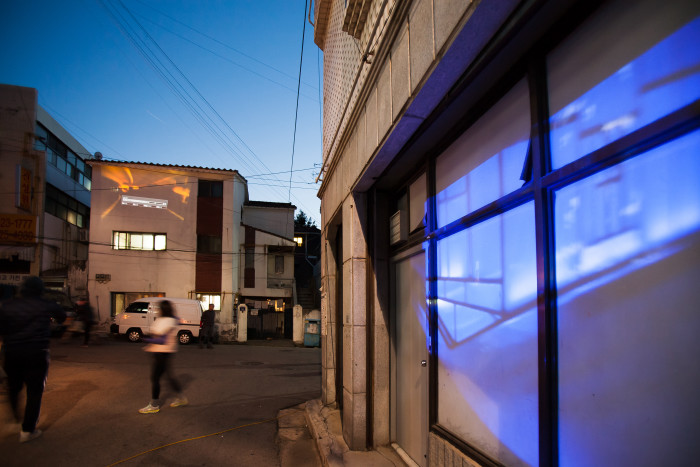 The street of the old town Naeson-dong Euiwang-si Geyonggi-do has been changed into the art museum. The residents at Naeson-dong street where artist Junha Park’s studio is located take a look at what is going on with curious eyes. On the walls of houses in the street projected were the video works of artist Junha Park, and at a corner of the street there was a sound performance by the artist from Australia with a banner of ‘The Firefly In My Hands’. Colorful lights were shining the space around the studio and everybody from elementary school students to parents of high school students and unique-dressed people were enjoying the spectacle.

“The Firefly In My Hands”, this is a title of the open studio by artist Junha Park. Old residential areas remain in Naeson-dong even though apartment buildings have been already built. The artist who is using the basement of a building in the old town as his studio asked cooperation to artist Jungkug Seo who used to work together in the past. And while making a lights plan based on the name of the town with artist Seo and remembering the firefly which we cannot find in the city any more, they named the open studio. And they planned a workshop to make a flashlight with participants. Participants lightened the street of Naeson-dong with flashlights that they made themselves and filled the street with colorful lights as fireflies fly around. 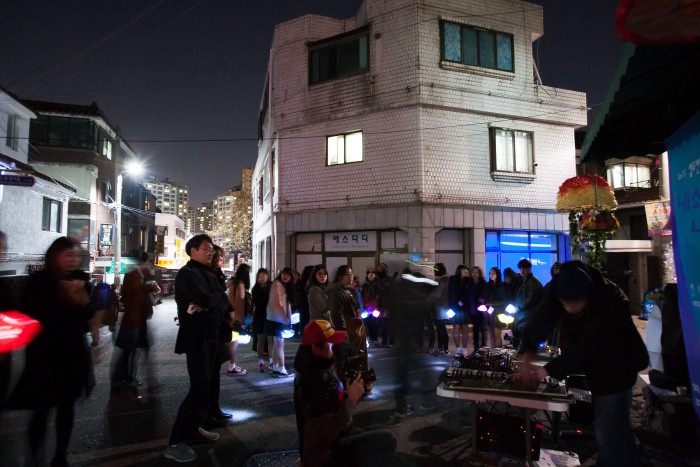 In his works artist Junha Park conveys his thoughts on the space and the time he himself experienced in the past. Now he presented the video installation remembering his hometown being submerged by building a dam, and started to work the new space based on the pagoda he saw in Xi’an. According to the artist, we trace back in memory with seeing green apples but apples turned red soon changing the past. Working based on deliberation and insight on the relations between the past and the present with thinking through an object, the artist reveals his thoughts over the existence of human beings in the time of relationship between the world and himself.

Saar in Germany the artist studied is very close to Volklingen Ironworks, which is the largest in Europe. Volklingen Ironworks is designated as a UNESCO World Heritage site. The industrial complex which played a key role of many workers and industrial development in Germany lost out to other countries like POSCO in Korea and now dimly shows the past glories only. Taking the opportunity to see the World Heritage Property project while studying in Germany, he is now also serving a curator to plan and run the projects of heritage exchanges. Leading an organization called World Heritage Exchange Project, he continues to study the heritage mainly in Germany and Korea and run the World Heritage Exchange Projects every year. He is paying attention to historical remains and study how it relates with the present, which is in line with his individual works. So far based on the research he reinterpreted the sites designated as UNESCO World Heritage such as Suwon Hwaseong Fortress and Royal Tombs of the Joseon Dynasty with many artists. 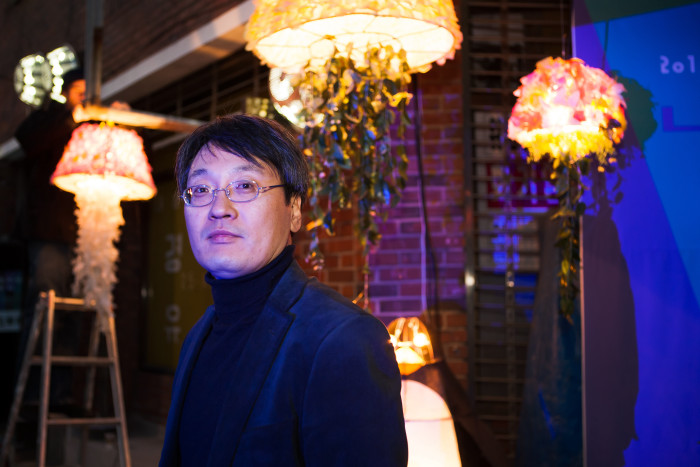 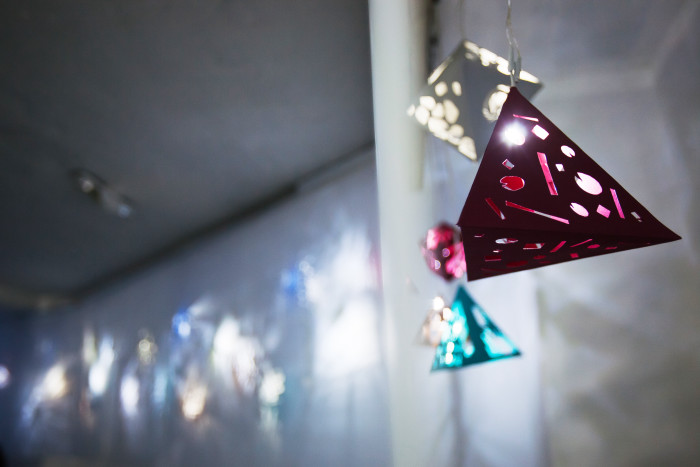 Artist Junha Park prepared foods from a snack bar in the area to welcome guests. He prepared sticky rice cake, gimbap and some wine with his acquaintances, which is appropriate to add the warmth in the sudden cold weather. We could not appreciate the outdoor lights works artist Seo and students at Kaywon Univ of Art and Design prepared until it was getting dark, and the video works projected on the wall in the street was the case. So first the artist had time for presentation to explain his own works in the studio, and he gave an easy explanation about the world of his works considering most visitors were students from elementary, middle school and high school. Detailed explanation continued such as his thoughts about the past and the present, what he keeps in mind when working, and what media he uses. A projector and a screen have been prepared for the presentation in the studio, and co-worked lights with artist Seo created the unique shadows and the shadows were projected on the wall. After the artist explained his works they had time to look around the studio having prepared food, and before getting dark the artist run a workshop to make a flashlight with prepared materials. Participants made flashlights with their own characters using small LED lights, lampshades and painting and cutting material and went around the alley. 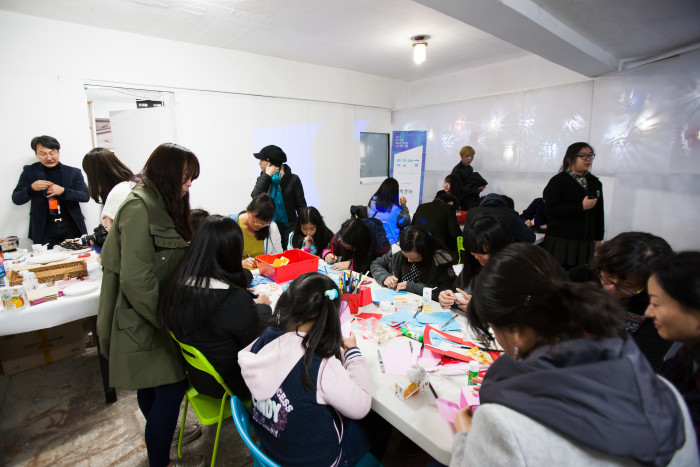 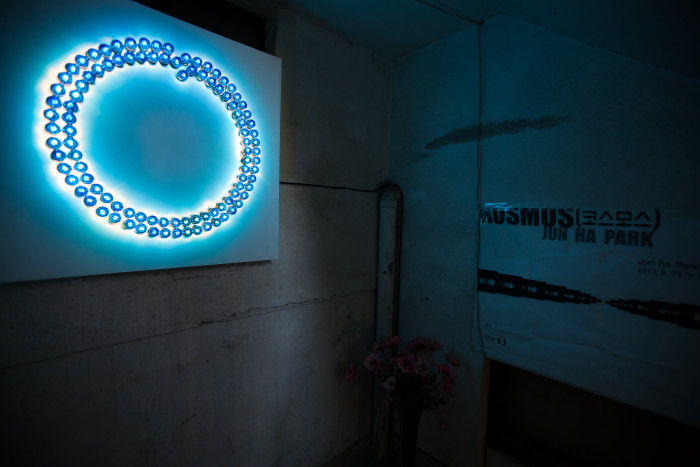 In the street outside of the studio the artist’s work was showing and soon after the sound performance of artist Stefan Tifengraber from Australia started. Stefan Tifengraber, who was in the Chang-dong Art Creation Studio from July to December in 2015, and now stayed in Korea, was invited to show the neighbors the frontline of modern arts which match well with artist Park’s works in the street of Naeson-dong. As an artist who has been participating in the best sound festival in the world such as Ars Electronica in Austria and active in his working, Stefan Tifengraber presented performance and music with lights and various noise caused by the self-designed musical instrument using Jing of Samulnori he learned in Korea. It was the moment when the lights and the sounds of modern arts filled the street of quiet Naeson-dong. The neighbors watched what was going on out of curiosity and artist Park and the open studio staff explained that there was an artist’s studio here and this was a kind of event which changed the street into the art space. Even though the event was enough to cause civil complaints, the neighbors have responded as an audience. Something rare happened at a corner of the street that many people appreciated the performance and the working of the artists. After the performance was over, the event participants voluntarily asked what the artist’s intentions were and what made those sounds and had time to make a sound by themselves. In accordance with the object of G-Open Studio ‘The Neighborhood Artists’ by Gyeonggi Cultural Foundation(GGCF), we can let people know there is an artist working around them. And some artists who live and work nearby proposed to artist Junha Park that they could collaborate someday. 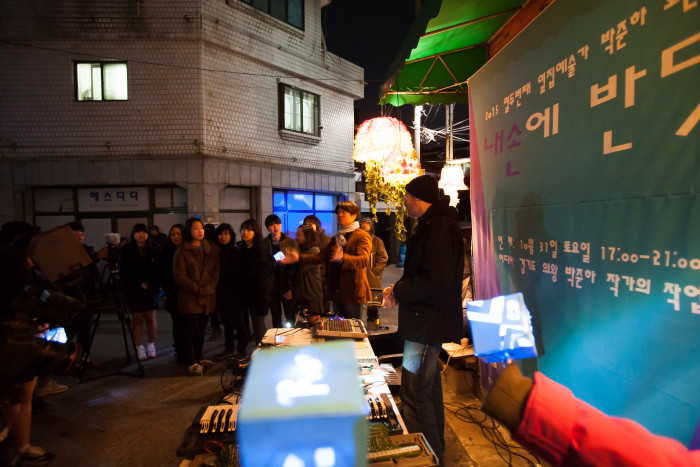 The open studio of artist Park not only showed his studio to the public but also made visitors participants in the event through the workshop, and colorful flashlights by participants and unique lights by artist Seo and students of Kaywon Univ., the video works of artist Park projected on the walls of the building in the street and the sound performance changed the quiet street of the residential area into the art space for a while. The open studio presented passers-by empty moments in their day and tried to make the art available to them, which was an appropriate attempt to bring artistic activities in the exhibition halls into the space of everyday lives.

The old town of Naeson-dong surrounded with apartment buildings is a planned satellite city, but now became the area full of trails of our lives. At present its redevelopment has been planned. For the artist who thinks over the relations between the past and the present, the situation of the town eventually goes into the context of his work once more and becomes a part of artistic activities. The plan to remove existing habit