in the midst of constricted daily life because of COVID-19!

Gyeonggi Cultural Foundation (President, Kang Heon) introduces new businesses and programs for the Complex Cultural Space, Gyeonggi Sangsang Campus, where forests and cultures comingle. With more than 800,000 visitors and presenting pleasures to the provincial public since its inception, Gyeonggi Sangsang Campus is planning to welcome the provincial public with more programs this year. 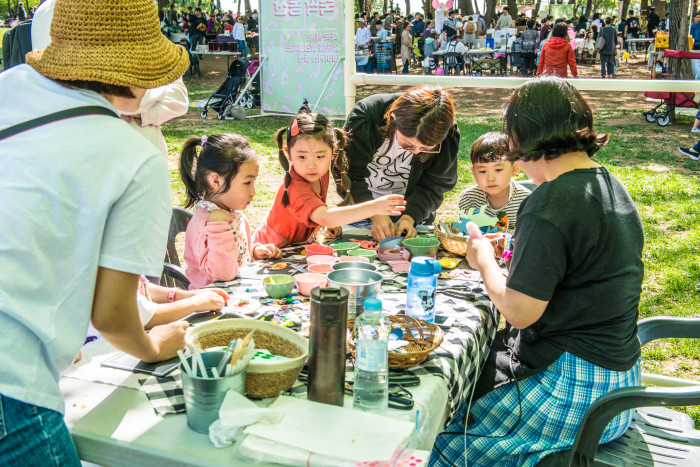 <Forêt Forêt> is a leading festival of the Gyeonggi Sangsang Campus held in every year since its opening in 2016, and is a giving and sharing space for cultures embracing content such as markets, movies, performances and sports. In this year, festivals with many concepts are scheduled to be held each month, extending operation hours for Forêt Forêt, Forêt Concert, and Forêt Movie Screening until 10 pm.

<Forêt Forêt> will be held on the last Saturday every month starting from June until September, and will have an art market and an experience program, based on open, leafy spaces, and <Forêt Movie Screening> is scheduled to play movies with themes along with displaying artwork and performances. Moreover, <Forêt Music Concert> is planning to have a ‘Midsummer Night’s Forest Music Concert (tentatively named)’ and a Halloween Day Special Music Concert which children up to youth can enjoy. Especially this year, the conference hall in Education Building No. 1964 has been designated as “Gyeonggi-do Province Public Movie Theater for movies” in collaboration with the Gyeonggi Cultural Content Agency. Cinema talks and humanities lectures will be held alongside talks by movie directors or actors, which will make Forêt Forêt Festival more engaging.

<Maker Festival (tentatively named)> shows the abilities of the resident organizations in the Gyeonggi Sangsang Campus, and <Design Festival> (tentatively named), which opens in the second half of the year as a linkage festival with a design platform ‘Design 1978’, will both be held for the first time, and <Gyeonggi-do Province Living Culture Festival> for the purpose of sharing living cultural sites in Gyeonggi-do Province, will be also promoted.

Various educational programs based on culture and art are prepared by the educationally specialized ‘Education 1964’ of the Gyeonggi Sangsang Campus, “For everyone, only here, learning while enjoying the educational platform” 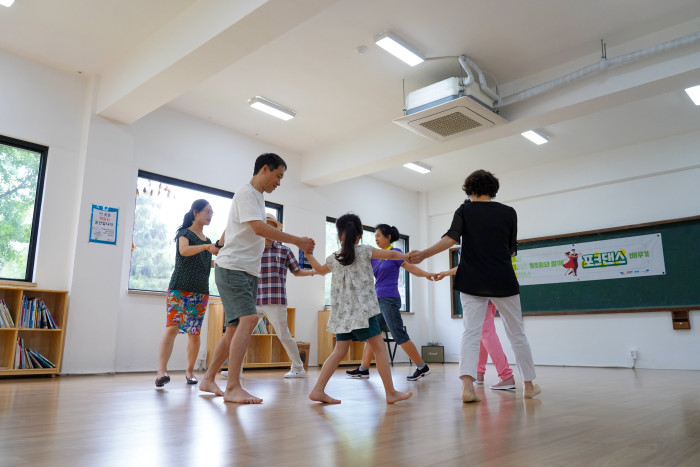 Programs are being operated, such as <Regular Program> which is targets children, families, and seniors, <Regional Schools linked Program>, which is a career experience education targeting free grades in the neighborhood schools, and <Both Hands School>, with a theme of social change and future-targeting adults. Especially this year, experimental and natural educational programs are invigorated through extended arrangements of programs specializing in using the forest ecosystem of the Gyeonggi Sangsang Campus, such as bee farming, vegetable gardening, experiencing forests and so on. Throughout the outside space of ‘Nest in Forest: Room of its Own’ opening together with ‘Education 1964’ and ‘Education Atelier: Garden of Conversation’, it will provide programs for experiencing the pleasure of interchange through self-directed education and conversation. 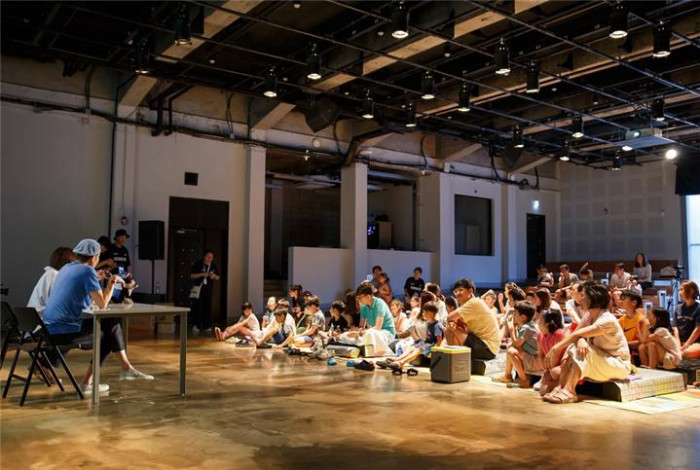 Gyeonggi Sangsang Campus provides support by selecting resident organizations through a public selection each year, who challenge the status quo experimentally in cultural art. The size of support is to be extended to 43 teams this year, increased from 41 teams last year. Organizations in various categories, such as ventures, living culture, and complex workshops, move in to cooperate with Gyeonggi Sangsang Campus.

Space with work and culture is to be organized by vitalizing a venture culture in Gyeonggi-do province throughout various linkage programs with resident organizations. To do this, programs will be supported by the resident organizations, such as ▲Tailored education for the empowerment of abilities ▲Providing opportunities to new content developments through consulting and benchmarking ▲Marketability reviews through participation in cultural business such as events and festivals ▲Opportunity expansion for external advancement.

Affiliated programs with resident organizations are also in process to invigorate the maker culture, such as <Sang Sang (Imagination) X Maker>, a maker program using the professional abilities of resident organizations, and <Free Suggestion Program>, suggesting practical ideas. ‘Playground for Companion Dogs’ which had good responses from the <Free Suggestion Program> last year, has been extended until this year, providing rest and playgrounds for visitors.

A newly launched program this year through resident organizations is the <Maker Festival> (tentatively named). It is a test market combination of a festival and exhibition form, introducing the various areas and abilities of resident organizations by showing experimental items. The festival, in which ventures in cultural art fields are gathered in one place, is scheduled to be held in the second half of the year.

④ <School of life creating a culture of new life > 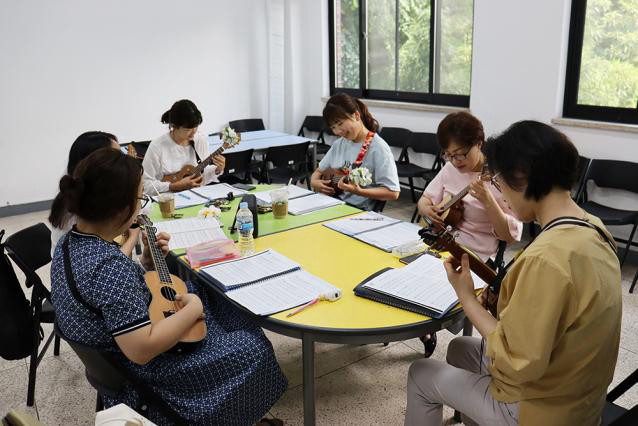 Education for local culture specialists and living culture field activists is to be strengthened through <Dasari Cultural Planning School>, for which there is a 7th graduation this year, and <Living Culture Club>, supporting the hobby club activities of the provincial public, and the <Discovering Local Craftsmen Project>, sharing living techniques and know-how in our neighborhoods, operated since last year. <Provincial Public Empathic Performance: Sing a Young Man>, street art form linked with <Living Culture Club>, and busking performances are scheduled to be held on stages in 31 cities counties in Gyeonggi-do province. <Gyeonggi-do Provincial Living Culture Festival> is also being promoted for the purpose of sharing living cultural sites within the Gyeonggi area.

A new program, based on spaces newly developed, is starting. A production culture based on living technologies is to be vitalized, and maker activities of provincial residents will be supported throughout development of <Imagination Laboratory> (Manufacturing, Carpentry, Porcelain, Glass) and <Life Creative Workshop> (Fabric, Sewing, Coffee, Children creative workshop, Book binding room, Autonomous working space, Glass & etc.), to be opened inside of the building of ‘Saeng Saeng 1990’ in the coming July.

⑤ <Design Platform which will be the center of the Design Culture of Gyeonggi-do Province, Design 1978>

The space which is to decorate the final Gyeonggi Sangsang Campus creation is ‘Design 1978’. Its opening is imminent, by remodeling of the formal forestry building and through cultural revitalization. ‘Design 1978’ creates specialized spaces for design manufacture, designers’ research, development of synergy products & so on. Furthermore, it will be a foothold space for designers’ co-working, starting from design contents studies through the development, manufacture and sales by preparing occupancy spaces for the design field.

In pilot program which will happen before the opening in ‘Design 1978’, design work integrating cultural, social, environmental, art, and regional features of Gyeonggi-do province with design media will be displayed. The concept of ‘Design 1978’ is to be a concretized and user-centered operating system, stablished through the operation of round tables, seminars & so on. Furthermore, marketability of the resident organizations will be reviewed, and opportunities for pioneering markets such as the distribution of designed products will be provided by holding a market type <Design Festival> after the opening.

On the other hand, Gyeonggi Sangsang Campus plans to operate regular performances between July till December by selecting performance & media organizations. Opportunities for the initial performance will be provided to creative organizations who possess performance content with popularity and artistic value, and which are having difficulties with first or new performance initiation. Selected organizations will get the chance to perform twice a year on the stage of ‘Space 1986’ in Gyeonggi Sangsang (Imaginary) Campus along with some performance support funds. Organizations having novel and creative performances can plan to fascinate the provincial public through regular performances. Furthermore, in the second half of the year, facilities and experiences using outdoor spaces will be constantly expanded, such as ‘Water Park Playground for Children’ and ‘Space of Light’, using outdoor landscape lighting.

Joo Hongmi, the newly elected director of Culture and Art Headquarters, said, “I hope this will be a space that provides rest and consolation to the provincial public, who have suffered from conditions related to COVID-19. I will do my best to make this space where something new and diverse takes place, the liberal imagination is peaked, in a space of provincial public-centered living art.