[Special Talk Talk] A woman who practices Silhak through plays; she is here too

It was a cloudy day in early spring. Due to chilly weather with snow flurries, theater actress Park Jeong-ja had to give up on taking the subway and walking to the museum as she had planned a couple days before. Although she likes riding the subway, it takes about 90 minutes from Nonhyeon-dong to the Museum of Silhak. You need to transfer subway lines once and take the local bus from Ungilsan Station. In addition, she had to save her energy for the evening performance of Billy Elliot the Musical (D-Cube Arts Center, through May 7). She enjoyed the beautiful rivers and mountains of Namyangju as her son accompanied her on the drive to the museum.

Before entering the museum, Park suddenly looked over at the Birth Home of Jeong Yak-yong across the street. She straightened herself up and bowed to his birth home. “Let's go inside—Oh, I should pay my respects to him first.” Theater actress Park Jeong-ja starts all her work from her heart. She is the first guest of the Special Talk Talk at the Museum of Silhak.

“Oh… how embarrassing. I'm so embarrassed that this is barely my first visit here.”

She seemed to be ashamed of herself even before we began to go up the stairs. After watching the six-minute video exhibit entitled Sangsimnaksa (Beautiful Scenery Enjoyed by Your Heart), she looked around the museum in earnest. Relics and descriptions on the left side in Exhibition Hall 1 showed the social and economic atmosphere of the Joseon Dynasty in the 17th and 18th centuries. On the opposite side were exhibits related to Yu Hyeong-won, who had studied non-mainstream history and become the root of the Silhak spirit.

“Anyways, do people actually study nowadays? It seems like people would not study using letters. Silhak sounds difficult. I wonder if it's because the word includes hak (學, studies).”

That is why 20 museum guides are working for the Museum of Silhak. In the museum, 3 guides are waiting for visitors each day. Listening is more attractive than reading, and stories are more charming than descriptions. The guides are mostly in their 60s. Most of them are former teachers or professors. What they have in common is that they want to practically utilize the knowledge that they have accumulated over their whole lives. That is where the Museum of Silhak comes in. They each have their own unique storytelling about the relics. The charm of words is truly something special. 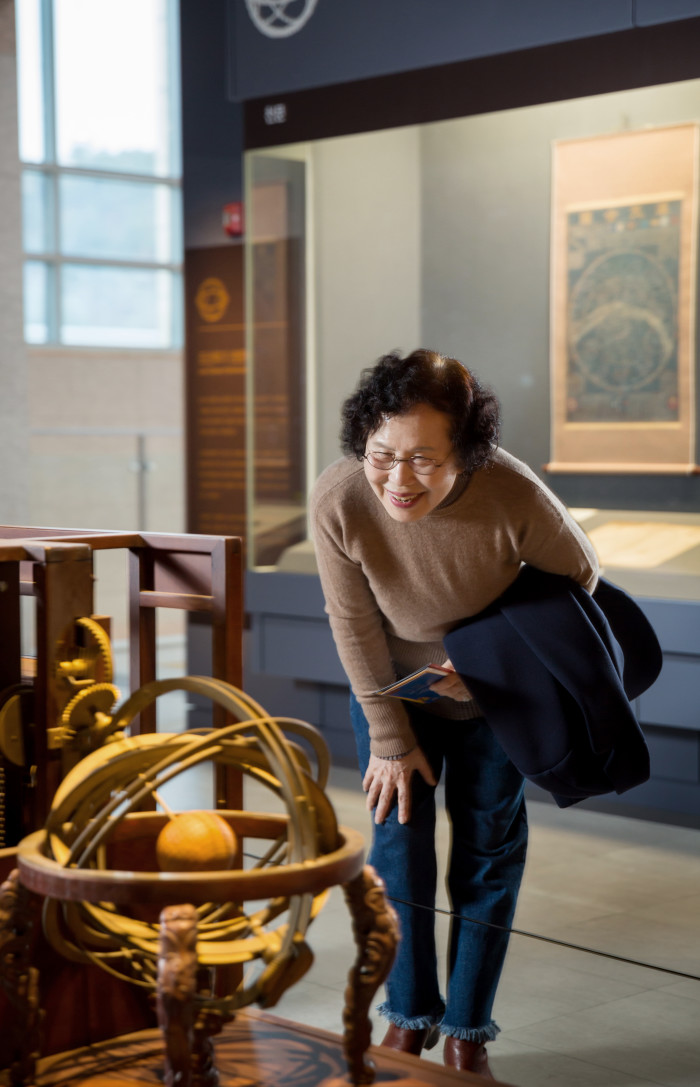 “The museum's consideration for visitors' sense of hearing—I think that is a kindness. We look at the exhibits because they are relics. In reality, they are just items. However, we can imagine a variety of things beyond time and space with just a broken piece of an artifact, all thanks to guides' unique storytelling. That is why stories are important. What about this? This is the audio device that explains the exhibits when you stand in front of each of them. Naturally, some people want to hear a guide's explanation. However, some would like to look around the museum alone and just enjoy their time here. I don't think that people are pressed for time when they visit here. The Korea Artists Welfare Foundation has this program where 100 actors and actresses read some novels. Can you imagine visitors being able to listen to actors and actresses' explanations in front of the exhibits? Isn't that a brilliant idea?”

(Pointing to the Travel Route of Joseon Missions to Imperial China) “This writing below Yeolha (Jehol)... bukgyeong (Beijing)? I think it's supposed to be Beijing. The letter "buk (Bei-)" seems to have been erased. The letter at the end seems to have been erased a bit as well. I feel bad when I see small letters of exhibits that have been erased or neglected. Is it because the exhibit is made of low quality materials? I don't expect it to exist for thousands of years, but it should at least be able to last for a few hundred.”

The last exhibit of Exhibition Hall 3 of the Museum of Silhak is New Kunyu Wanguo Quantu. In 2011, the Museum of Silhak restored the Kunyu Wanguo Quantu made by the Joseon royal court in 1708. It took 8 months to restore the map. Mateo Ricci, who was an Italian missionary, drew the Kunyu Wanguo Quantu. He gave this pictorial world map to China's emperor for missionary work in the 17th century. Crown Prince Sohyeon brought the Kunyu Wanguo Quantu from China. However, the map was treated poorly in the royal warehouse for a long time because it was considered a gift from barbarians. During King Sukjong's reign, two copies of the map were drawn. They had been kept in the Kyujanggak Royal Library, Seoul and in Bongseonsa Temple, Namyangju. The one in Bongseonsa Temple was destroyed during the Korean War. The Kunyu Wanguo Quantu contains a nearly 300-year history. It is said that China's emperor was surprised when he first saw longitude and latitude on the map. Matteo Ricci delivered a message to the emperor, saying, "If you look around the world from side to side, you will find many more things than you have ever known." If you look carefully at Seoul to its eastern end, you will find this valuable place named the Museum of Silhak.

“Many museums seem to only focus on the number of people that visits them (laughing). People don't visit local museums like the Museum of Silhak often, so you need to cherish their visit. It would be great if you could think of what kinds of content you are going to provide and what kinds of memories you are going to give. It even took me about 40 minutes to come here today, although now that I know the museum is here, I’ll certainly have to visit more often.”

It is not really important whether the study of Silhak actually existed or not. If we can say that Silhak is a sincere perspective on reality and an effort for a better future, Park Jeong-ja is a veritable modern-day female Silhak scholar in the theatrical world. This is because she has been a theater actress for nearly 60 years and is thinking of how she can share what she has learned from stage acting. Now, the Museum of Silhak has her footprints as well.