One of the most perplexing questions at the Paleolithic Museum is, is this a real stone tool? Isn't it just awesome? In the view of ordinary people, stoneware and stone are not easily distinguished. It is not an easy task to distinguish whether or not it is actually stoneware, as most archaeological practitioners who do not major in Paleolithic are no exception.

The Jeongok Prehistory Museum, where I work, is a museum famous for a fist ax, so there are quite a few people who bring a fist ax. Unfortunately, no one has yet brought a real fist ax. In most cases, a stone that looks like a fist ax is brought. As such, it is difficult to distinguish between cracked stone and naturally cracked or weathered stone.

Because it is difficult to determine the authenticity of stoneware in this way, a “paleolithic fabrication incident” could have occurred in Japan. The Paleolithic fabrication case is an archaeological scandal of the era when a man named Shinichi Fujimura secretly buried stone tools in 700,000-year-old volcanic ash and excavated. The stone tools he unearthed were not real relics, but new fake stone tools, but no one knew whether they were fake stone tools until they were caught by a newspaper reporter's telephoto lens to dig a pit and secretly bury them. In the Paleolithic period, there were no borders and no nations, but Fujimura seems to have mistakenly thought that finding old Paleolithic ruins in his country was as if it were building up national pride. 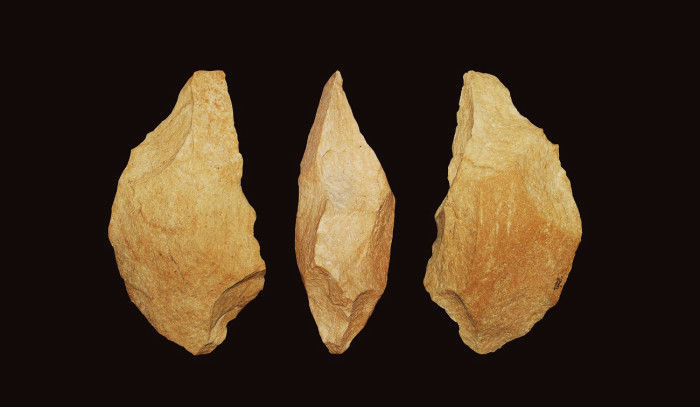 A few years ago, a middle-aged man with a pretty firearm glance came to the Jeongok Prehistory Museum with a book he wrote. As we sat face to face and started talking, we explained that alien scientific civilizations already existed in the Paleolithic era, with the expression that we would tell you something big secret, and showed some pictures in the book as conclusive evidence. The photo in question was a stony stone made of obsidian. Considering that this hard stone could be cut sharply without any traces, it was argued that an advanced scientific civilization had already existed in the Paleolithic era, and that civilization was an alien civilization. At first glance, the obsidian stone blade, which had been exquisitely separated, appears to have been cut off by an alien sharp cutting tool. However, the obsidian stone blade is a stone tool made by a stone ware craftsman of the late Paleolithic era using an advanced method of making it. There was a video of the scene where a large obsidian stone blade of more than 15cm was removed by pressing and tearing it off, and there was no news after that. It was an unfortunate event that was caused by interpreting the sophistication and sharpness of obsidian stoneware as a similar science.

Voltaire said I don't agree with any of your arguments, but I respect your freedom to say that. Of course, freedom of thought is respected, but it is a completely different dimension to dazzle others with fabricated or false evidence. That's why fake news becomes a problem.