A sense of community in the ‘pit of bones’

The “pit of bones”, Sima de los Huesos, is perhaps one of the most eerie names of archaeological sites. The ruins belong to a group of Atapuerca ruins found in the highlands of Burgos in northern Spain, famous as a stopover on the Santiago pilgrimage route. The Attapuerca ruins were discovered by accidentally exposing a section of a cave that was connected like a spider web to a small hill of limestone during a railroad construction to carry iron ore and coal, which had rapidly increased due to industrialization in the late 19th century.

Excavations began in earnest from the late 1970s, and various ancient human fossils and stone tools were discovered, including Homoantecesor, an ancient human being 1 million years ago, and Homo Heidelbergensis, about 400,000 years ago. For scholars studying the origins of mankind, it is famous for its treasure trove. It was designated as a World Heritage Site in 2000, and excavations are still being conducted every summer. 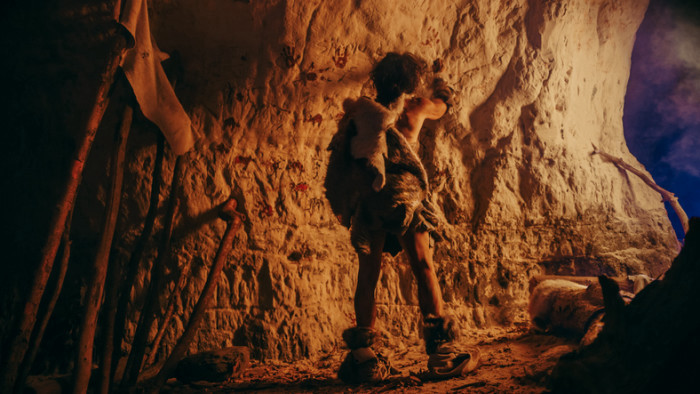 The Bone Pit is a unique and important site in the Attapuerca ruins. Thousands of ancient human fossils and huge amounts of animal bones were found together in a vertical cave over 13m, giving it the name of a bone pit.

Julia, a local archaeologist who guided me when I visited this place some time ago, explained that it was like a supermarket for the ancient humans living in the area at the time. Deer fell into deep vertical burrows like traps, and animals such as bison were eaten as easily as buying things in a supermarket. It seems that the animals were driven into this pit, but it is not known for sure whether they hunted or whether the animals passing by accidentally fell into the pit.

In this pit, 28 fossils of Homo Heidelbergensis were found. As individuals of so many different ages are found in one place, it is believed that they had a custom of moving their dead companions to one place, a kind of funeral ritual.

On the other hand, among these ancient humans, there are children who appear to have suffered from developmental disabilities, as well as adults who have suffered from spinal injuries or tooth inflammation. This is because they seem to have lived a normal life with someone's help for quite some time. Surprisingly, many scholars believe that this is possible because the ancient humans hundreds of thousands of years ago already had a sense of fellowship to maintain the community.

It is a confusing time of distrust of each other due to the COVID-19 19 incident. It would be an exaggerated interpretation if the ancient humans found hundreds of thousands of years ago in a pit of bones really show how to overcome this crisis in what kind of posture. It won't.

This is because “community consciousness” is the greatest survival strategy of our humanity.