Not long ago, the banks of the Hantan River in Yeoncheon and Pocheon in Gyeonggi-do and Cheorwon in Gangwon-do were certified as world geoparks. The World Geopark is one of UNESCO's three major protection systems along with World Heritage and Biosphere Reserves. It is used as a tourism resource by preserving beautiful natural attractions that are of great geological academic value and of great importance in archeology, history, culture, and ecology. The purpose is to revitalize the local economy by doing so, so it can be said that the geological value of the Hantan River, represented by the basalt columnar joints, has been recognized worldwide as a feat.

The Hantan River is the only basalt gorge in Korea, and was built on the lava plateau that erupted from Orisan, North Korea about 500,000 to 100,000 years ago. The Hantan River basin is the only place on the Korean peninsula that had volcanic activity in the inland during the 4th geological period, with large and small lava lands spreading on both sides of the river, and the basalt columnar joints of several tens of meters high, reminiscent of the Grand Canyon. Showing the officer. This time, the section certified as a World Geopark is 1165 km2 in Yeoncheon, Pocheon, and Cheorwon, Gangwon, Gyeonggi-do, which is 400 times the area of Yeouido, and includes 26 geological and cultural attractions such as Jaein Falls, Pigeon Nang, and Goseokjeong. 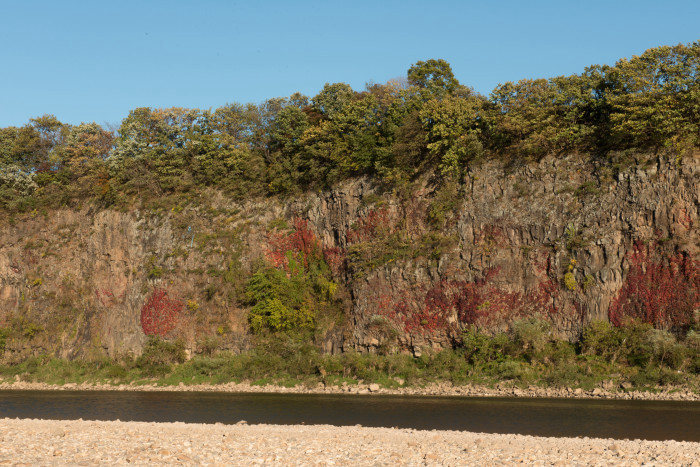 The flat lava site, a unique geological and topographic environment formed by lava eruptions in the Hantan River basin, was a living environment differentiated from other areas on the Korean Peninsula for the Paleolithic people of the time. The lava land's abundant water resources and wide fields have provided a good place for many people to live in this area since prehistoric times. Meanwhile, several tens of meters of basalt cliffs prevented the erosion of the river, providing a topographical environment in which cultural heritages of various periods and forms, such as Jeongok-ri Paleolithic ruins, can remain well to this day.

In addition, the basalt columnar joints, which are a major component of the Hantan River Geopark, are also important in that they also act as a barrier, and the ancient gwanbang ruins that took advantage of these topographical advantages provided important topographic features for this area. Castles in Goguryeo, including Dangposeong Fortress, were built along the columnar joint of the Hantan River, where it is easy to block enemy access and at the same time provide excellent views.

As such, the geological attractions in the Hantan River basin are not just beautiful natural environments separated from human life, but are noteworthy in that they share history with numerous people who lived in this area and continue to this day. This cultural value is important in that the geological attractions of the Hantan River are enhancing the value as a geopark differentiated from other regions.

It is thrilling to imagine the Paleolithic people who lived along the Hantan River looking at the constantly flowing lava with fearful eyes, standing in the same place hundreds of thousands of years later. Isn't nature the best remedy these days, where you miss everyday life so much? This is why the news of Hantan River's World Geopark Certification is more welcome.